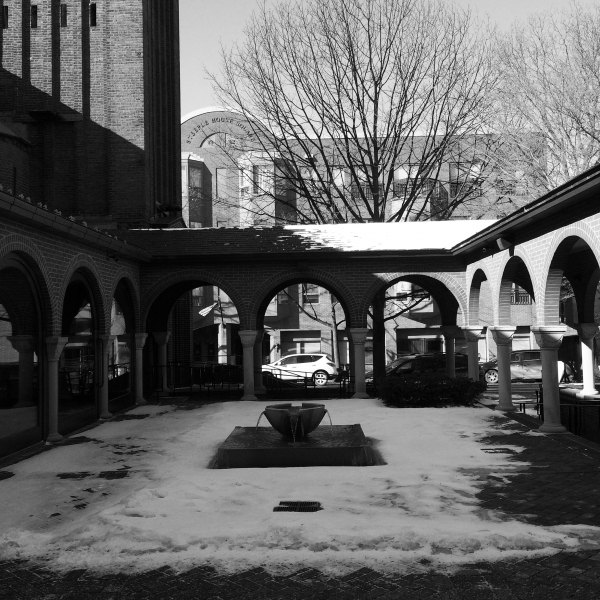 “We are turning cemeteries into playgrounds.” Father David Peck

Well, here we are. Seven weeks later. I can hear late Sunday night traffic crawling by on James Street, on the other side of the drawn shades. The house is quiet, and I sit between two lamps that cast light and shadow around the room. Light and shadow. That’s all there ever is.

It’s been a long seven weeks. A long Lent. I came into it with a few things I planned on giving up, but it would seem that God had other things in mind. Go ahead, God said, give up your social media and your sweets, but I have bigger plans. It seems that’s the way of God, that just when you think you see the hill you’re supposed to climb, you get to the top and – hey, look at that – there’s a mountain range on the other side.

After two very busy years of writing projects, business died off. For the last seven weeks I’ve been finishing up existing projects. Every potential job I had in the pipeline dried up, evaporated, disappeared. I’m not saying this to garner sympathy – it’s just part of the story. It’s been uncanny, how the lack of work has coincided with Lent. It seems there are many metaphorical deaths we can encounter. It seems that sometimes you can try to give up something for Lent, and then other times Lent can decide for you what you will give up.

I’ve been reminded that there aren’t many things harder than trusting in what we cannot see, yet that’s what I’ve been asked to do this Lenten season.

“Do we have to go down this road again? We’ve been here before. I’m not really in the mood for learning another lesson.”

But it seems the road will go where it will go, and you can sit down and pout along the side of it if you want. There’s a wide shoulder, and a lot of folks are just sitting there, passing the time, discouraged or angry or petulant. But the fact remains that you will have to walk the road at some point.

That voice said something besides Trust me. Strangely enough, it was also saying, Take this time to write the sequel. By sequel, I mean the sequel to my book The Day the Angels Fell. Just write it. That’s what I was sensing. So I did, all 80,000 words. And I’ll be looking for your help in narrowing down the title and a few other things in the coming weeks.

I was thinking of all these things when we went into church this morning – the dead spell in regards to work, the sequel I’ve been writing, the trust trust trust – and Father David said this phrase towards the end of the sermon, and let me tell you, it nearly knocked me over.

“We are turning cemeteries into playgrounds.”

If anyone ever asks me again what we mean by the Resurrection, that is what I will say.

Because I feel like that’s what God has done for me this Lenten season, took a dead time, a time full of anxiety and uncertainty, and told me to play. Write. Create. Turn what could be a monument to despair and hopelessness and, instead, have fun. So that’s what I did.

After church this morning, just as the sun was warming up and the sky was shifting into that late-morning spring blue, about thirty or forty children grabbed their Easter baskets and raced through the cemetery  behind St. James, looking for Easter eggs. I suppose it was all rather improper, the way they skipped along over the grave sites, the way they climbed over the massive tombs. At one point my daughter sat on a large, above ground grave, looking through her eggs. Cracking those little plastic things open to see what treasures were inside.

But there was something immeasurably beautiful about it, watching those children laugh and dance and play among tangible reminders of death and mortality.

It is, in essence, why I am a Christian. I believe, in spite of evidence to the contrary, that every metaphorical cemetery can be turned into a playground. I believe that God can somehow take these dead places and before you know it, before you can turn around, there’s laughter, and there’s playfulness, and there’s friendship.

I’ve got a few events coming up where I’d love to see your face:

– Friday night, April 10th, from 6pm to 8pm, I’ll be at Aaron’s Books in Lititz for their local author night. Please come by and say hello.

– Sunday, April 12th, at 6:30pm at The Corner Coffee Shop I’ll be hosting a very special event with my friend, Caleb Wilde. We’re going to be talking about the death-positive message behind The Day the Angels Fell. Caleb is the writer behind the extremely popular blog, Confessions of a Funeral Director. He’s wise, and funny, and kind, and way more interesting than me, so come on out. Children are welcome.

– Monday, April 13th, at 5:00pm, I’ll be in Radiant, Virginia, reading from The Day the Angels Fell at God’s Whisper Farm, hosted by Andi Cumbo. If you’re in the northern/central VA area, you won’t want to miss it. Details HERE.

11 Replies to “Turning Cemeteries Into Playgrounds”