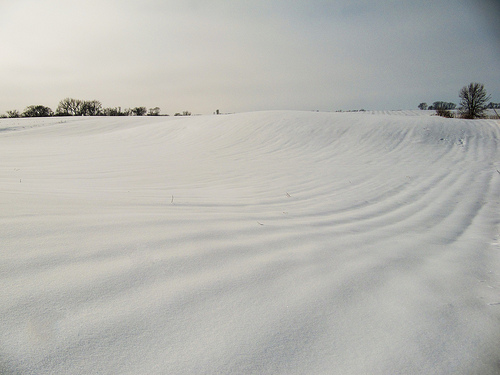 Have you ever driven out of the city on an overcast January afternoon? Have you ever left the traffic and the brake lights and the three-day-old gray snow in your rear view mirror? Have you ever gotten out to the fields you grew up hiking through, the rolling hills and farms and long lanes, and marveled at how white everything was, how unmarked?

I know those roads better than any other roads in the entire world. I know where they go and where they come out. I know the woods and the farms that line them, the places to fish, the turns that will spin your car around if you’re not careful.

We drove out that way last week to see some friends, and the sun was setting somewhere behind the dim slate clouds and the low light shone off of fields of untouched snow. Corn stubble poked through, but that was all, just endless miles of white, and beyond the fields the hills, and beyond the hills, eternity.

My daughter Lucy said something that perfectly echoed how I felt at that moment.

“If I could do anything in the world right now, I’d run into the middle of that field.”

There was such longing in her voice. We had just pulled into our friends’ driveway.

But as so often happens, the glory of desire met the unflinching light of practicality.

“I don’t know,” she hedged. “I mean, I don’t have the right boots on. These would soak through. And it’s so cold.”

“I don’t know,” she said hesitantly. We sat in the truck for a few more minutes but it became clear she wasn’t going to do it, no longer wanted to do it, so we walked into our friends’ house, and that was the end of that.

It happened to us five years ago when the business I owned wasn’t doing so well and we decided to run into this beautiful way of living. For us it was entirely new, entirely unthought of before. I would make a living writing books for people. Maile would home school the kids. We would go where the wind took us. We would live simply and give away any extra we had.

Unlike Lucy and her field, we actually did it. We ran out into the middle of that glorious life, and it was incredible. It has been incredible.

But, right about now? It feels like our boots have gotten wet through. Our feet are freezing. We’re looking back at the truck, a half-mile away, and sometimes I wonder what were we thinking? How long did we think this could last?

It’s been a tough few weeks. A project we thought was in the bag slipped away. Out-of-the-ordinary expenses add to the weight of these moments. For the last two years we’ve had work lined up fairly far ahead, but suddenly we’re staring down the barrel of what looks like some lean months ahead.

We’ve reached that point where we ran into the field, into that glorious promise, and it was so worth it. But cold reality sets in, and we’re wondering what to do next.

This morning at church, Father David recounted something one of the kids said in children’s church.

“God must really be dedicated to the process.”

So true. Our God is not one of destinations, or God would pick us up and drop us down at the end of the race, the end of the hike, at the top of the mountain. But no, God is dedicated to process. So we hold our heads up, we cling to hope, and we embrace what this current process will bring to life in us.

We turn away from that truck parked back in the safe place, now so far behind us. We turn towards the next wide open, snowy field. And we run into it.

One year ago, Tim Kreider and I released a book that tells the story of a triple-homicide that took place right here in Lancaster County. It also tells the story of Tim’s journey after he discovered that his son had committed the murders. The book has been out for a year now, and today you can get it for your Kindle or Nook for $2.99.

Also, for reasons unknown to man, Amazon has the paperback version of my novel, The Day the Angels Fell, on sale for $9.91. You can get that HERE.

Finally, join me this Thursday night at 7pm at the Pequea Valley Library for a reading of The Day the Angels Fell.

3 Replies to “If I Could Do Anything in the World Right Now, I Would…”