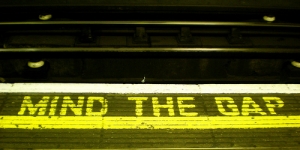 Today’s guest post is brought to you by Erin Feldman, an online friend of mine who is in the middle of a Kickstarter campaign. I’ll let her tell you about it, but please consider helping her reach her goal:

Nobody tells this to people who are beginners, [but] I wish someone told me. All of us who do creative work, we get into it because we have good taste. But there is this gap. – Ira Glass

When I first started writing poetry, I explored the familiar territory of childhood and adolescence. It was a good starting point, a necessary one, but I eventually came to the end of myself. I could only write about my life for so long. What then?

It was my first gap, and I wrestled with it. Poetry seemed the best way to express myself. Did I really have no more words? What if I never wrote another poem again? The worry and fear nagged at me. I kept attempting poems, but they were awful, awful things. I’m sure I have them in a notebook somewhere, but I keep them hidden from view. I remember them because I need to mind the gap, but I don’t ever intend to return to them.

How did I move forward? I worked. I trained myself to do “the horrible work necessary to do to get to writing well, that is so difficult one may just not be willing to do it.”[1] I fought the worries and fears. I went back to school where I encountered another gap: being surrounded by poets and fictions writers who seemed to have everything together. I now know they didn’t, but I had no inkling of that at the time. I only knew I felt out of place and incompetent. I wondered how in the world I’d managed to get into a creative writing program in the first place.

The doubts followed me, but I continued writing. I did the “hard work…responsible for the sudden ease of the second.”[2] I held onto a hope, however small and fragile, that I was supposed to be in that setting. I was supposed to be writing poems. Eventually, poems came, poems set free into a love of language and image and ideas. Eventually, I found the confidence to term myself a poet.

I would never have found either of those things without the drudgery of the work and the encouragement of mentors. The same holds true with other writers and artists. They need someone to remind them that they have been called to their work, whatever that may be. They need to know it’s all right to feel frustrated and angry when they encounter the gaps. More importantly, they need a little light when they’re in one of those gaps, which is why I created an Emergency Hope Kit.

While I can’t be physically present to tell writers and artists to press on, I can offer hope and encouragement through a journal filled with instructions, quotes and Scripture verses, and illustrations. I can give them the means to plod on for a while longer until they find “the sudden ease” of a poem, a novel, a drawing, or other art form. I can do that.

Interested in learning more about the Emergency Hope Kit or pledging to purchase one? Visit the Kickstarter.

[1] from Dean Young’s The Art of Recklessness: Poetry as Assertive Force and Contradiction

[2] from Richard Hugo’s The Triggering Town: Lectures and Essays on Poetry and Writing

One Reply to “Mind the Gap”