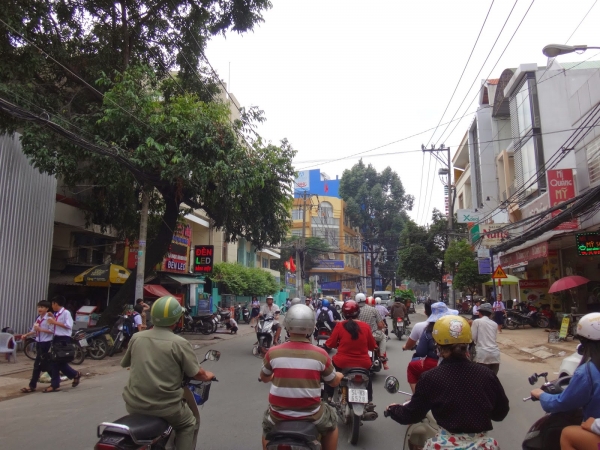 This is a poignant post by my friend Jim Ogle about what it was like for him to go to Vietnam as a tourist 47 years after serving in the Army during the Vietnam War. It was first posted at his blog, and I asked if I could share it here.

Forty-seven years after volunteering for the Army, I am in Vietnam.  I did not expect my emotions to be fresh.  I’m confused.  I doubted memories from that time could come back so clearly.  I don’t like it here.  I don’t want to be here.  There is still blood in the ground.

Most of the guys I hung with were sent to ‘Nam.  A couple of them died.  Some of my friends tried desperately to avoid the draft. My brother-in-law hid in the basement of of his own home until amnesty was granted.  He died anyway.  We were all boys.

I drew an incredibly long straw.  I spent 1968 in South Korea, lonely but filled with false bravado.  We were pampered by houseboys and protected by the ROK Army.  Our mission was to aim missiles at an airspace the enemy smartly avoided.  We drank and partied away the notion that we were on their target list, too.  I am forever grateful that I escaped the war without a single scar or moment of danger.  And, I am forever ashamed that I bragged of being so clever and capable as to have selected and attained a specialty that was not featured in ground combat.  I just  played while my best friends prayed.

My lifelong friend Roger and I double-dated a lot before he was drafted.  He had a pale green ‘53 Chevy with a big back seat.  We hunted together after the war, but I could tell by the manner and speed with which he handled a firearm that he was reliving something we could not share.  I gave up hunting.  He died last summer.

When I returned to the States, those who stayed home seemed to have evolved into elites or dope addicts or both.  They were smug and unrecognizable with their dirty long hair and pot stained mustaches.  They had stolen our girlfriends and screwed our wives.  I didn’t know if I should try to fit in or ship out.  I came within hours of re-enlisting.  I was confused.  I wanted to be told what to do.

In my Army, the Drill Sergeants could still spit in your face while they screamed obscene descriptions of your worthless nature – and you’d better not flinch.  It didn’t help.  We lost the war anyway.  No one outside Washington had heart in the fight and it seemed no one in the bubble had skin in the game.  When the enlightened were at Woodstock cheering Janis Joplin, I was at Fort Benning guarding William Calley.  I could be gung-ho one day and a slacker the next.  I bought a VW Microbus and Nehru jacket in September, then a coat and tie in December.  I was confused

I couldn’t vote or buy a drink and had been branded a veteran.  I was twenty.

If you’d like to follow Jim and his wife Susie as they travel around the world, you can find his blog HERE.

Also, if you’d like to check out the Kickstarter campaign where I’m raising money to publish my first novel, you can check that out HERE. It was fully funded in two days (!) and now we’re working towards a few stretch goals.