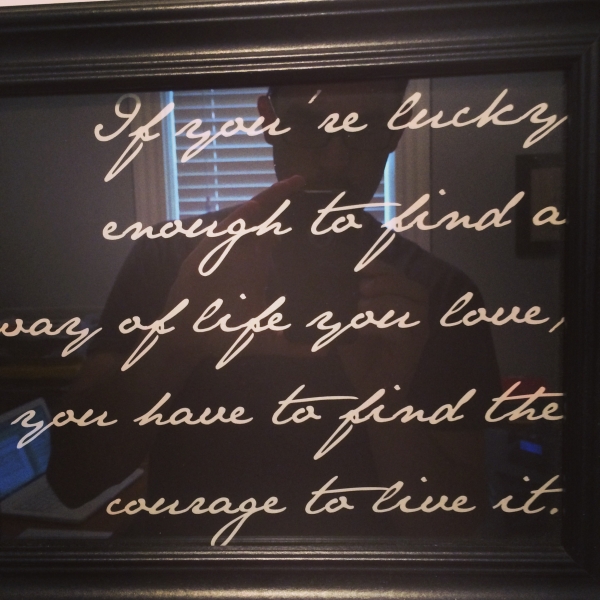 The other day I took all five kids to the park by myself. I know. I deserve some kind of a medal. Lucy rode her bike around and around, Abra trailed behind on her little scooter, and Sam went from one thing to the next. Leo mostly chilled out in the stroller and vacillated between crying and sort-of-crying, so I kept pushing the stroller in circles and trying to get him to fall asleep.

Cade, though. Cade had his own little adventure.

There were three guys at the basketball court. Two in high school and another about Cade’s age. They asked if he wanted to play two-on-two. He had never played a pick-up game at the park before. He could have shrugged them off and said no. He could have kept shooting by himself at the other end of the court. I could tell he was afraid.

I was kind of afraid for him.

The other night I exchanged a few long emails with my friend in Kelowna, British Columbia, as we often do. His name is Jason and he’s one of my best friends. We’ve known each other for almost twenty years, ever since he showed up during my sophomore year in college with his long blond hair and massive Bob Marley posters.

We were writing back and forth about this whole idea of fear, and he was encouraging me in regards to my novel, when he said something that really got my attention.

“The fearful place we often avoid has some integral part of us wanting to be heard, and it brings the greatest reward when we truly step (into that place)…Sometimes we get hurt, but that risk is a part of it.”

When I look back on some of the more disappointing times of my life, or the times that I find myself wondering “what if?”, those times have one thing in common – in some way I allowed fear to keep me from doing something.

On the other hand, the last five years of my life have been the most exhilarating, rewarding years I’ve ever had, and they’ve been years that I’ve lived right in the middle of fear. I’ve taken on stories I wasn’t sure I could write; I’ve chosen a way of life I wasn’t sure I could make work; Maile and I took a cross-country trip and then moved from a cabin on forty acres and into the city. All things that we did in spite of the fear.

The next big fear for me is publishing this novel, and I think Jason is right – there’s some important part of me that wants to be heard, and I have to step into that place.

We got home from the park and I told Cade how proud I was of him for playing in that pick-up game at the park. He just smiled.

Are you willing to enter into that fearful place in your life and discover what important part of you is trying to be heard?  Or are you avoiding the fear and silencing some inner need?

3 Replies to “What I Learned From Taking Five Kids to the Park (or, Living in the Middle of Your Fear)”