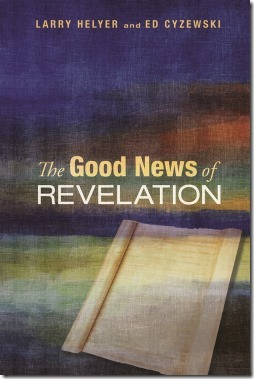 Today I interview Ed Cyzewski, author of The Good News of Revelation. Ed is a kind, thoughtful writer and a good interwebs friend of mine. Plus, he was brave enough to release two books within a month of each other, and if that doesn’t make you want to read this interview, I’ve got nothing else for you.

Revelation scares me. Should I be afraid?

I would be more afraid of the people who tell you to be afraid of Revelation. There’s no doubt that the images, beasts, and scenes are frightening, but in their original context few if any were ever intended to correspond with specific, literal, future events. Rather, they created a kind of painting that captures what a group of early Christians were experiencing and the hope they were waiting for. The original readers of Revelation had a great deal more to fear from their Roman rulers than from John’s letter to them. In fact, it doesn’t make a lot of sense to send a letter to people who are suffering and dying for their faith that tells them some day they’re going to suffer and die for their faith a lot more. Revelation was offering a commentary of their circumstances and offering hope for the future.

While reading Jewish literature from between the testaments called the Pseudipigrapha in Israel, I came across all of these books like 1 Enoch that read almost exactly like Revelation—it’s called apocalyptic literature. It was one of the most startling epiphanies of my life. I saw that John was really just using a literary form that would have been commonly understood in his day. These books have been neglected by many popular Christian writers who tend to match Revelation with current events rather than the literature of its context.

The majority of the books available that come close to our book’s focus are long and written for academic readers—they always say they’re for pastors and lay men, but I don’t buy it. I wanted to write something short and accessible that still gave readers a basic interpretive framework for understanding Revelation.

When I was a kid there were always people trying to interpret Revelation, saying such and such was so and so and this place was that place. How does your book fit into the long line of Revelation prognosticators?

My co-author lines up more with the futurists, though he is far from a sensationalist futurist. I’m more of a partial-preterist along the lines of NT Wright. We tried to keep our book open to a variety of possibilities. However, I think there’s room for our views to intersect a bit.

Which one of your favorite authors (living or dead) would you like to read TGNoR and why?

That’s a tough one. I would love for John Collins to read it. He wrote The Apocalyptic Imagination, which is one of the defining books on the literary genre of Revelation. I would love to know what he thinks of how we used historical fiction to illustrate the original context of Revelation. However, he would probably also point out everything I messed up, so maybe that’s not the best idea after all!

This was a tough book to co-write since we hold to different views on some points of Revelation, but we do share a pretty significant amount of common ground. However, our goal all along was to recover the story behind Revelation’s original audience. What was John saying to the seven churches in Asia and how does that message translate for us today?

Larry did all of the heavy lifting with scholarship and background information. He wrote the main chapters of the book and then I edited and rewrote sections in order to make them a bit more accessible. I also wrote a series of short historical fiction pieces at the start of each chapter. Each piece illustrates a key idea that we’ll be discussing.

What did you learn about Revelation while writing this book that stands out to you the most, now that you’re finished writing?

The thing that stands out the most is that I still have no idea what the bowls of wrath are all about. I have some ideas, but reading commentaries proposing various views did little to clear that up for me. It just goes to show how hard it is to understand a form of literature from 2,000 years ago!

However, in the process of writing this book I have also been struck with just how important Revelation 12 is for the overall trajectory of the book. It really provides an overview of the high points in salvation history while also explaining why the Christians in Asia Minor were suffering. It’s the part of Revelation that best captures the tension we experience of God’s victory of evil even though we still are contending against the “dragon” today.

What’s your favorite cereal, and how can it be anything but Lucky Charms?

I don’t see how it could. I gave them a fair chance, but the marshmallows grossed me out. I transitioned to Fruit Loops and never looked back. Although as an adult I’ve moved on to Honey Nut Cheerios. It’s hard to beat the nostalgia of childhood I experience with a sweet bowl of Cheerios.

Thanks so much for hosting me at your blog. I hope my cereal preference didn’t ruin everything!

Learn more about the Good News of Revelation.

Ed Cyzewski is the co-author of The Good News of Revelation and Unfollowers: Unlikely Lessons on Faith from the Doubters of Jesus. He shares his imperfect and sometimes sarcastic thoughts on following Jesus at www.inamirrordimly.com.