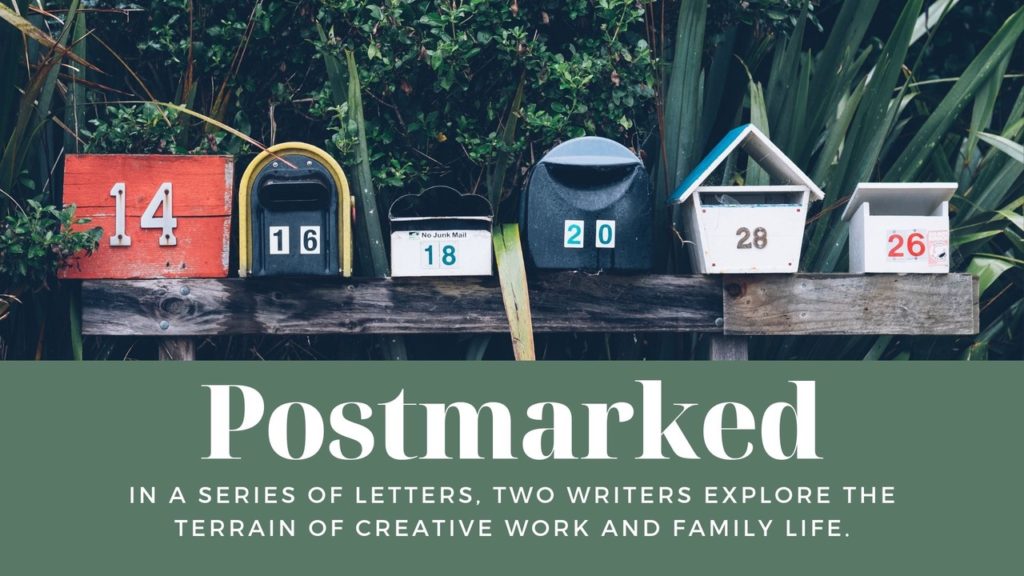 What a quiet gift your letter was to me. In this age of hot takes and comebacks, snark and opinion, it’s refreshing to be on the receiving end of a gentle and friendly note. I hope this finds you and your beautiful family doing well.

It’s interesting to me, the timing of our correspondence: in five days Maile and I will celebrate our 20th wedding anniversary, and conversations about vocation, family life, and creative work have threaded their way through our years together. The temptation for me will be to try and tell you everything in one sitting. I’m not sure that once I start I’ll know where to end.

Maile and I first met in the cooling autumn days on a small college campus in central PA at the end of the last century. It was my junior year in college, and I had five classes with this captivating girl, her hair short and blonde, her eyes kind and blue. She had a very earnest way of listening to our professors’ lectures. It was easy for me to study her because she sat in the front row of every class, while I always sat at the back.

One day, between classes, I realized she was a short distance behind me. Determined to talk with her, I pretended to tie my shoe. Nervous about the possibility of overtaking me, she nearly stopped. I had to wait a rather long time for her to catch up. Eventually, I introduced myself. We walked slowly across the wide open space, talking about Counting Crows and books and life. We started studying together on quiet nights in the mostly-empty library. We were both writers. We both loved books and stories more than just about anything else on Earth.

16 months later, I found out that I would be working in Florida after graduation. Sitting at a round table in the library, we discussed long-distance dating, inevitable if she returned to Ohio and I moved to Florida. We knew we didn’t want that. In what is perhaps the least romantic pseudo-proposal in human history, I said sheepishly, “What if we get married?” I formally proposed a month later. Her “yes” was the single most important word a person has ever said to me.

It’s been a long journey since then. How can you ever possibly know who this person you marry will turn into as the years go by? We moved from Florida to England to Virginia and finally back to Pennsylvania, where my ancestors have lived for 13 generations. We had six children along the way, each a story of their own.

Those first two years in Florida were a treasure. Two years of just us, no children, entire states between us and family. But I have one regret. I wish, during those two years, I would have told her to forget about money, forget about a career—just do what you want. Do what you were created to do. Write.

If I could have seen the challenging years ahead, the tiring years, the hard years, the full years, the miscarriages, the disappointments, the long nights, the empty bank accounts, the lessons only time can teach us, I would have given her those two years without hesitation. I would have insisted she stay home and write.

But we have so quickly taken on the values of our culture, haven’t we? If someone, single or married, is not “contributing,” is not “earning,” is not “making money,” what kind of wasteful life must they be living? So, she substitute-taught or worked as an admin at an office or tutored.

After ten years, after Florida and England and Virginia, we came back to PA broke, broken, and uncertain. I struck out on an apparent fool’s errand, attempting to co-write and ghostwrite for a living. Maile continued caring for our children and our home. It was all hands on deck. And for years, we squeaked by in those roles.

But I got busier as a co-writer and even found a publisher for my novels—suddenly, I was making a living as a writer, what both Maile and I had always dreamed of doing. The years passed, me doing what I loved, Maile holding everything else together. Don’t get me wrong, I have always been a hands-on father, getting up in the night with the kids, doing laundry, dishes, all of that, but even when I helped around the house, so much was required that it left Maile with zero creative margin. The words you wrote in your last letter were so true and familiar they made me ache: “the pattern had been decided early on: the indivisible ‘we’ was Ryan at the bow, Jen at the stern.”

One night over dinner in 2018, our middle son said, “But I thought Mom went to college to be a Mom,” and we all laughed long and hard. But Maile and I caught each other’s eyes across the table and I saw deep hurt. I realized our marriage was, in a very fundamental way, broken.

While our life together was working for me, it was not working for her. It was the beginning of a new time for us. We had to make some changes.

I could keep going but this is a long installment already. I have so many questions for you! How have you balanced marriage, family life, and creativity? What does Ryan think of your time spent writing? In what season do you now find yourself?