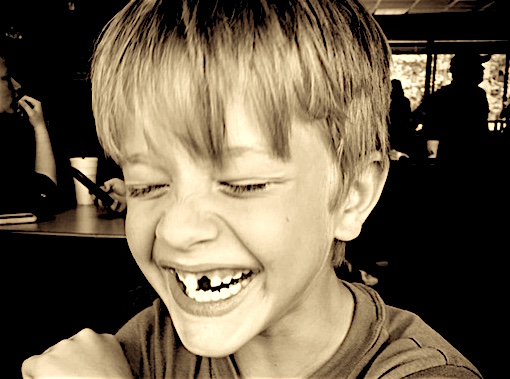 It is a warm day, the day he turns eight years old, and he eats his birthday waffles and drinks his birthday coffee – decaf – and while the morning sun in North Carolina burns off the nighttime rain, he begs to go out and try his bike for the first time. I push this new two-wheeled beauty out through the front door and the morning heat is a blanket and we’re both sweating before he so much as sits on the seat. His mouth is a straight line and his eyes are unblinking. The houses are lined up and quiet, sleeping in. The woods behind the line of houses is still, a mid-summer green,  and the shadows lurk dark, like sun spots.

We begin with long runs back and forth on the dead end street, him pedaling and wobbling while I hold the back of his seat and jog alongside. There are very few cars on this Saturday morning. Back and forth we go. His little legs pump. His hands white-knuckle the handlebars. He fights to get it. This is Sam. He is a fighter. He does not quit, yet it is hard to imagine how he will go from this wobbling thing to a balanced rider gliding on two wheels. Sometimes it is nearly impossible to see the what-might-be.

I realize, at some point, he will never learn unless I let him go, unless I pry my fingers from the back of his seat, so I do, and keep jogging with him, holding my breath, and then he is riding! Riding! He glances over and sees I am no longer holding him up and he jerks to the left and the wheel catches and he falls to the macadam.

You have to keep going. Even when I let go. Keep looking straight ahead. Don’t look at me.

Back and forth we go again. He grows more confident with each pass, and I let go again, but this time I hang back so he doesn’t see I’ve let go and he rides all the way to the cul-de-sac and squeezes the brakes and I catch up and he grins at me over his shoulder.

I realize, in that instant, that he will learn nothing about riding bike until I let him fail. In fact, the more I let him fail, the faster he learns.

Soon, I let him start off on his own, and the first five tries, the first ten tries, are false starts and swerves into mailboxes and frustration after frustration but soon he is kicking off on on his own and wobbling down the street, pedaling and swaying and swerving at things. But doing it. Riding his bike with a grin on his face and sweat at his temples that clumbs his hair into straw.

You’re doing it, I shout. You’re really doing it. And at about that time he starts going towards a mailbox and I can see him leaning away from it, wanting not to hit it, but so focused on it that the bike doesn’t know where else to go. He brakes. He hits the mailbox. He looks over his shoulder at me again and shakes his head as if to say, Why couldn’t I escape its magnetic pull?

And this, too, I learn from teaching my son to ride bike, that if we focus on something, we will go towards it, even if we don’t want to. What we focus on becomes our target.

Thanks to my friend, Seth, I’ve been thinking a lot about failure, about honesty, about what it means to own up to the journey we’ve had. Teaching my son to ride bike has taught me a lot about failure. I am reminded that it’s possible, crucial even, to learn to fail well – it’s the difference between falling on your feet or falling on your face. I am reminded that failing fast is the best way to do it.

But I’m also reminded that if you focus on something too much, you’ll ride right into it.