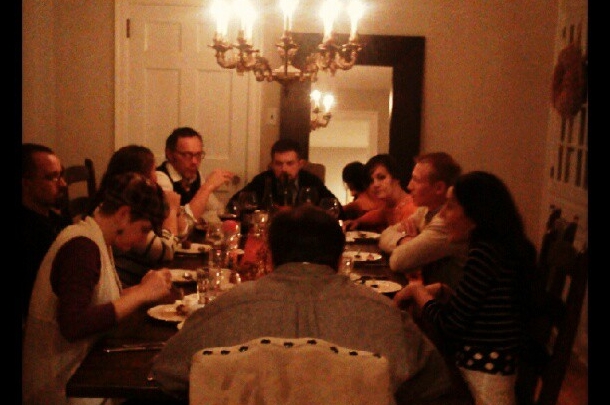 Maile and I stood on the Philadelphia sidewalk in the rain, waiting for the doors to open. We crept a little closer to the couple in front of us, the couple holding the massive, multicolored umbrella. It was December, and a cold, city wind swept down the boulevards, peeked into the alleys, raced the drizzle around corners.

At 8pm the doors opened and we followed the slow trail of people up a steep set of steps flanked by two burly, neckless men checking photo IDs. Then the line of people went inside and down steps that led into an industrial basement. Bare pipes and cement walls were covered in old concert posters and artistic graffiti. The tickets had said no smoking, but decades of cigarette smoke escaped the walls and wandered the dark stairwell.

The crowd, all these slowly walking people, descended together, and they felt like family to me because we all loved Over the Rhine, and most of us had been following them, their story, their music, for many years. Decades even. We were in this adventure together, even if it led into the bowels of Philadelphia. Some people, like Over the Rhine, create things of such beauty that you would follow them anywhere, and if you’ve never seen a movie or read a book or heard music that made you feel that way, then you need to open your eyes, my friend, and look around.

Maile and I waited at the bottom of the steps as people showed their tickets, had their wrists stamped, and vanished into the next room. That’s when “our people” arrived.

I hope that I can still believe
the Christ child holds a gift for me
Am I able to receive
peace on Earth this Christmas?

– Over the Rhine, “Another Christmas”

For the last five years we’ve had dinner with this group just about every month. I barely knew most of them before we started sharing food together. There are five of us couples (six including the couple who moved to Florida a year ago and can’t join us very often anymore). When you spend five years with people, you break through the surfacey shit. When you walk with people through miscarriages and stillbirths and children born healthy (we have over 20 children between the six couples), business failures and successes, family stuff, and moving from state to state, well, it’s like a small grove of trees planted so close that their trunks literally start to grow together, their rings shared, their roots and branches entangled.

We haven’t officially taken communion together, but there’s something Eucharistic about those dinners, something holy. Which sounds funny because we’ve had plenty of conversations that push the boundaries of “holy,” but I think that when you start to give your life to other people, it’s the bread and the cup, the Body and the Blood.

Seeing their eight faces come through that dark door brightened that entire venue, and we laughed and hugged and went inside, found our seats.

I’ve been listening to Over the Rhine ever since 1996, when one of my roommates had an unhealthy obsession with them. But from the moment I heard their song “Poughkeepsie,” I got it. I fell in love with the way Karen Bergquist and Linford Detweiler’s voices swirled together and took me away.

And that’s what happened in that industrial basement on Saturday evening, way later than this 37 year old is used to staying up. I felt transported to another dimension, a place where nothing existed except that moment, that chord, that harmony. That mandolin solo. That aching lyric. That moment of silence in between notes.

The next morning, my friend Janelle wrote a letter to Over the Rhine, and they featured it on their Tour Diary. Here’s a small part of what she wrote:

We drove down there together, just a bunch of regular salt-of-the-earth folks. The ten of us, (“The Dinner Club”) have been meeting once a month for several years. We’re all in our mid 30’s, early 40’s and some of us have been listening to you for 20 years. What a DIVINE time we had. Thank you for being so inclusive in your performing. We could feel the trials and pain, the joys raining down from that stage last night, balm to our weary souls. We truly felt that in that dark, dingy basement in the middle of that bustling city, we met with God. I loved the imperfections, (and perhaps tacky) nature of the venue, it was an outward display of our inner workings….kinda hidden, a little messy, but lovely nonetheless.

A little messy, but lovely nonetheless.

And so after all of that, I guess what I’m trying to say is that I hope you have a good Christmas season, even amidst the dreariness of so many things lost, the seemingly impossible waiting, the sense that this world will never quite be enough. I hope you find a star to follow, and I hope it leads you to what you’re looking for.

Over the Rhine recently released a beautiful Christmas album, “Blood Oranges in the Snow.” Check it out HERE.

If you’d like to hear the story of how Over the Rhine gave me permission to use the lyrics from “Poughkeepsie” as front matter for my upcoming novel, check that out HERE.

The venue where we saw Over the Rhine was Underground Arts.