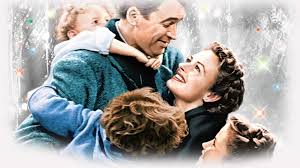 Some days you just feel pulled in seven different directions in a world that won’t let go, don’t you? A great breakfast with a friend and then walk six blocks home and some of the kids are sick so I had to take the girls to the dentist and before I knew it, it was four o’clock and things are still piling up. Work for an hour. Clean the house. Eat dinner. Do the dishes. Bed time snack for the kids.

Then I hear Leo crying so I leave Maile with the oldest four and go up to the dark bedroom and pick him up and rock him back and forth. His eyelids get heavy and he sucks on his index finger these days and you know what? There’s nothing like singing hymns to a sick baby in a dark room if you’re looking for peace.

Later we watch “It’s a Wonderful Life” and I finish off the ice cream because there’s not really enough left for the older four to split (“Nice of you to take one for the team,” Maile says). Maile cries in the beginning of the movie, when Mr. Gower accidentally puts poison in the capsules and then young George Bailey confronts him about it. We both cry at the end when George’s brother gives the toast: “To my big brother George…the richest man in town.”

I think back to what Bryan and I talked about at breakfast, how we have no idea what 2015 might hold. That’s both encouraging and terrifying. I think back to the beginning of 2009, back to when we had no idea the ride we were about to embark on: $50,000 in debt, my parents’ basement, trying to scratch and claw my way into a writing life. I think back to the fall of 2012, when I had no idea how good the next two years would be – Sri Lanka, Istanbul, and so many great writing projects. A move to a cabin on 40 acres of woods. Then a move into the city.

Who knows what’s next.

And that song comes to mind again, that old hymn I sang to sick little Leo, the one my Grandma Smucker used to sing:

Blessed Savior, Thou hast promised
Thou wilt all our burdens bear;
May we ever, Lord, be bringing
All to Thee in earnest prayer.
Soon in glory bright, unclouded,
There will be no need for prayer—
Rapture, praise, and endless worship
Will be our sweet portion there.