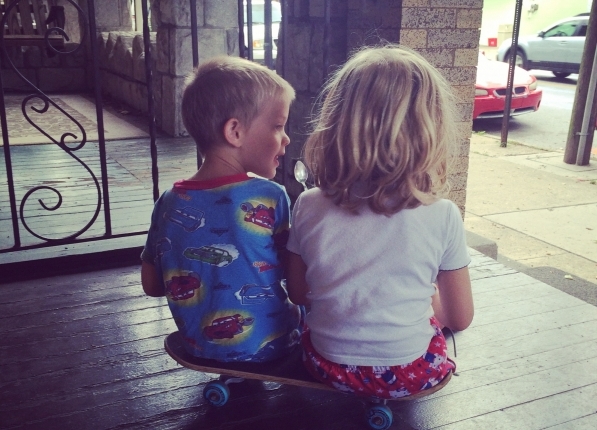 Yesterday I sat beside the bed, holding my daughter’s hand. Maile and I had just gone through a tough conversation with her, one that had to do with growing up and facing some of the things that come with getting older. Most of the time I think we want our kids to grow up too fast, be mature, be responsible, learn to do your own laundry and clean the house, and that’s all fine and good, but yesterday as I sat there with her I realized she is still just a little girl. She often tries to act grown up, and I can see glimpses of the young woman she is becoming, but she is still only nine years old.

Even after we had worked our way through the difficult territory, she still had tears pooling in her eyes. I got up and gave her a hug.

“Honey, what’s really wrong?” I asked her. “I feel like there’s still something bothering you.”

She nodded, and big tears dropped from her cheeks as she looked down for an instant. Then she looked up at Maile and I with a desperate look in her eyes.

ISIS. Ebola. Millions dying every year due to lack of clean water, lack of food, and the presence of preventable diseases like malaria. Wars and rumors of wars. Human trafficking. Addictions.

I think I don’t want to grow up – I want there to be other adults who will handle these things. My parents’ generation perhaps. I want someone else to clean up the messes.

But no matter how hard us GenXers try to deny it, we are growing up. We’re building businesses or having families or finding our place in the world. And in many ways it stinks, you know, growing up. It’s not fun being responsible, trying to change hard things, trying to fight for good. But we’re growing up, and it’s time.

It’s time to realize that if we don’t step up, no one else will.

I walk through this city, my city, and on a particular block, in front of a particular building, there’s always this guy who asks for help.

There’s something about him that doesn’t look homeless. If he is, he’s fresh on the streets. He’s usually clean, and he looks like someone who would own a pizza place or a jewelry store. But every time I walk down Queen Street, he’s there. The first time, he caught me off guard. He just didn’t look very homeless.

The next time, I saw him from a long way off, but again I didn’t know what to say. What to do.

I’m not sure how these things are all related. I just know that when my daughter said those words with huge tears in her eyes, I felt like I was looking into my own eyes. I felt like it was me saying those words.

4 Replies to “The Homeless Guy Who Didn’t Look Homeless (or, What My Daughter Told Me)”