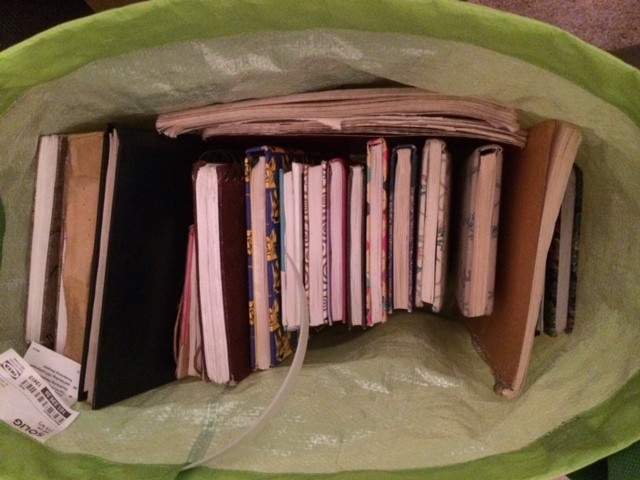 (Trigger warning: rape, suicide, and self-harm are discussed in this post. If these are topics that may cause you to descend into a dark place, please stop reading now.)

I met her parents at a Panera Bread just outside Baltimore to talk about turning their daughter’s life into a book. It was our second meeting. Afterwards we walked out into the parking lot and I went with them to their car. Her mother popped open the trunk and handed me a heavy bag full of journals.

“I’m really nervous about taking this with me,” I said. “I don’t normally take original material from my clients.”

We stood there, and I stared at the bag, heavy in my hands.

“I know you will,” her mother said. I reached in and took the bag out. i gave her mother a hug with the arm not holding the bag and shook her father’s hand.

“Oh,” she added, “I wouldn’t let your children look at those. They can be rather…dark.”

They’re in my office now, those journals. They are various sizes and colors, some the typical journals you might buy at a book store, others handmade and decorated with artwork. The girl whose handwriting flows from one year to the next started writing them when she was thirteen years old and continued on until she was twenty.

They seem alive. Sometimes, when I go into my office and close the door, I’ll stare at them, and it’s like they have a pulse. They breathe. Because that is her life, right there, those scribbled words that stretch from page to page. It’s an organism, one that tells over and over again, no matter how many times you read it, the tale of a girl who had a disease we struggle to understand.

There are the stories of the two times she was raped. Her sense of never fitting in at school. Her self-harm. Cutting. There is the story of telling a counselor about her rapes, a few years after the fact. There is the spiraling downward, and the suicide attempts. There are the cries for help, the anguish, the confusion. There is desperation.

Then there was her final journal entry, when she expressed that within a month all would be well – she would either be better, or she would be dead. And you can tell that there is immense relief, almost joy in that glimpse of the end of the struggle.

There is the last picture she drew, one of her alter ego flying away from the scene of her funeral on colorful wings over a church with stained-glass windows.

Then she walked into a lake, and they found her nine months later.

What can we do for those who walk among us but cannot bear this thing called life?

A friend of mine, Ami, only a few days ago retold the story of her own recent suicide attempt:

I don’t know what made me decide on a Sunday morning in early June to take a palmful of Tylenol before walking out the door to go to church like I do every Sunday. I didn’t wake up that morning knowing that I was going to try to die that day. When I was asked at church if I was planning on doing anything, I didn’t know that I would go home and take another handful of Tylenol.

I don’t know why I took that second overdose.

I don’t know the answer. I don’t think there is “an answer.”

When I was young, suicide was talked about in hushed whispers, the unpardonable sin. The Amish, the community from which my ancestral roots sprang forth, used to bury those who committed suicide on the spot, not even marking the grave. They were forgotten, or at least smoothed over, their history lost in a field beneath the tree where they were found hanging, or outside the barn where their blood was spilled.

Those lucky enough to receive a proper burial were deliberately buried outside the graveyard fence, symbolic of their excommunication from the church, albeit after death.

This is no different than many we hear today who talk about those who commit suicide as being “cowards,.” Such a label erases the person, erases the struggles.

“Selfish,” some will say.

“The most self-centered thing you could ever do.”

But I’ve read twenty-two journals of a girl who could not bear to live, and I do not see a weak person. I do not see a selfish person. I do not see a coward. In fact, she is one of the bravest people I’ve ever had the chance to know – she battled her illness for eight long years. Having read her life and the thoughts that continually went back and forth inside of her head, I don’t think I could have lasted eight years under that kind of torment.

I’m eager to tell you her story so that you can see these things, too. Maybe it will change the way you view this disease. Maybe, like the mud Jesus told the blind man to put on his eyes, her story will help you to see.

This is a long post, but the point I’m trying to make is actually a very short one.

Remember that none of us can comprehend the pain of another person.

Speak well of those who could not bear this life, or do not speak at all.