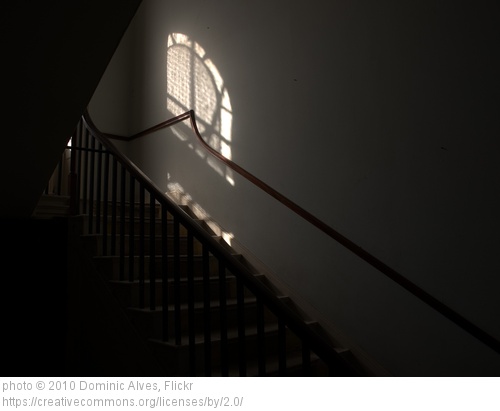 I generally don’t share much of the fiction that I write, but in order to get over the fear, I thought I should try to post a short story here every once in a while. This is a one I threw together this week after spending the last few weeks moving. Which just so happens to be what the main character is doing in the story. I’m still tweaking it, but, well, here you go. I hope you enjoy it. It’s titled, “Shhh”. Let me know what you think.

The row house we had just moved into was long and narrow with tall windows along one side that let in stretching patches of light, at least until we drew the shades down against the summer heat – then everything was dim and unclear, and the long lines of sight down the hallways felt strange. It was one thing when it was well lit and you could see from the front door all the way past the living room, down the hall, through the dining room and into the kitchen, clear at the back. But when the lights were out and the shades were closed, every shadow between the front and back seemed strange, like a doorway into someplace different. Someplace else.

“Babe,” my wife called up to me from downstairs. “Can you hang this picture in Abbie’s room?”

I walked down through all those shadows, and they clung to me, like sweat. It was hot out, and we were trying to keep things cool, so we left the lights out most of the time, and daylight glowed through the slats in the blinds. Boxes sat patiently on the hardwood floors, lined the walls, boxes from a former life waiting to be unpacked, waiting to spill into the new one. My mom had the kids for the day, and except for my wife and I the house was empty.

She handed me a large, framed picture of a girl holding a parasol. It looked like someone had drawn it about a hundred years ago with colored pencils. The girl looked like a doll, wearing a bonnet and an old-fashioned dress with a light blue flower print, but her eyes were abnormally large and she looked off in the distance, over my shoulder. The picture made me uncomfortable, always had, which is perhaps one of the reasons I had never gotten around to hanging it at our last house.

“Yes, really. I think Abbie would like it in her room.”

I looked at it again.

“If I would wake up to this girl staring at me, I think I’d piss my pants,” I said. “And what’s she holding in her hand?”

“I know what it’s called,” I said, but in the back of my mind I was thinking, Not that hand – I’m talking about the hand behind her back. What is she holding behind her back?

But of course I didn’t say that out loud. I’m always looking back and wishing I would have said things out loud.

“It was my grandma’s,” she said, in that all too recognizable tone. “I like it.”

I gave her a skeptical look, but she just raised her eyebrows and poked me in the sternum with each word.

“Fine,” I said, sighing. “Abbie’s sleepless nights due to this thing will be your responsibility. That’s all I’m saying.”

I started to walk away and she turned back to the boxes she had been unpacking. I crept up behind her and pinched her butt, then ran for the stairs. She laughed and threw a small cardboard box at me.

“Maybe after I hang this thing,” I said, “you can meet me on the middle level.”

The third floor was made up of a landing and two bedrooms, none of which had overhead lights. The house was built in 1906, and the third floor had been added sometime between then and now, so the only electric it had ran along the baseboards. I held the picture carefully as I walked up the narrow stairway, trying not to gouge the walls with its corners, but the frame was large.

As I came up into the already-dark landing, clouds outside the house quenched the sun and a distant rumble of thunder approached the city. I was glad the storm had finally come. I hoped it would cut the humidity, maybe bring cooler weather in behind it. For a second it was almost too dark, and I thought about going down to get a flashlight, but then the sun fought back, and dim light filtered in again.

I held the picture up against the wall and felt a chill when I saw the doll’s face, then I laughed out loud to shake the spell, but the sound of my own fake laughter only made the air seem strange, electric, like the lightning on the way. I sat the picture down, deliberately facing it towards the wall, then hammered in the nail.

Or at least I tried. But the nail would only go in so far, and then it felt like I was banging up against something metal. I tried moving the nail, but this time it bent and the hammer dented the drywall. I tried yet again, in a space right beside it. Before I knew it, I had done a real number on the wall, and the nail still wasn’t in very well.

What is going on in that wall?

I thought I had left a box of screws and anchors in her room somewhere, so I walked over to the small closet and opened the door. The doorknob was like all the other doorknobs in the house. They were a bronze color with a peculiar design on the handle, something that looked like a Celtic cross or a clover. There was something very ancient about it, something primal.

A few scraps of old carpet sat on the closet floor, shedding their edges. I pulled the carpet up and underneath it the floorboards were loose and creaking. One was loose. I peered down into the blackness wondering if the box of screws had somehow fallen between the cracks. Something darted from one side to the other. I dropped the carpet and shot up, banging my head on the shelf above.

I walked over to the wall and slammed the nail in. It still wouldn’t go in all the way, so I bent it to one side. This is the kind of handy man I was. This is how all of my projects normally turned out.

Whatever, I thought to myself, hanging the picture on the damaged nail. Now I HAVE to hang it, just to cover that stupid hole.

I adjusted the picture to make sure it hung level, then walked away, rubbing the back of my head where I had hit it on the shelf. I stopped in the doorway and shouted down to my wife.

“If you have a second,” I yelled, “Come up and look at this picture. I don’t want to touch this thing again.”

“Yeah, right!” she said. “I know why you want me to come upstairs.”

“Seriously, come take a look,” I shouted back at her.

I turned towards the picture again, I guess to make sure it still looked level from across the room. But something seemed different. I walked towards it through the room, my feet creaking on loose boards, my eyes squinting. The sun slipped behind the clouds again, and the room dimmed. I had to get within a few feet of the picture just to double-check what I thought I saw.

“What did you say?” my wife’s voice called up to me from the ground level. She sounded like she was in the bottom of a well, or deep inside the earth.

But I didn’t say anything. I wasn’t sure what to say. The girl’s hand was no longer behind her back. It was up in the vicinity of her face, and her index finger, somehow too thin for a “girl” that age, was now up over her lips.