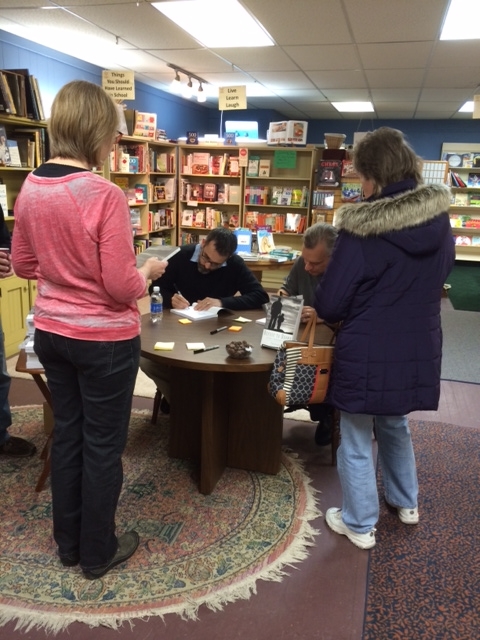 You never really know how a book signing will go, especially when you’re a writer hovering somewhere around my level of fame and fortune. In other words, no fame and very little fortune. I’ve had book signings or talks at local libraries where a nice crowd showed up, and I’ve had book signings where in the span of an hour one solitary person meanders up to the table and you soon find out that they’re not even interested in your book. They’re simply looking for the restroom.

So it was with some trepidation that I loaded up Maile and the kids into the minivan and drove from one end of the county to the other on Saturday. Our destination? The official launch of our new book, Refuse To Drown, to be held at our local independent bookstore, Aaron’s Books.

It takes a fair bit of time to get four children to put on their shoes and coats and get out to the van and get their seat belts on and please stop punching your brother, Sam, and please stop playing in the snow in those shoes, Abra, because now look at your tights, they’re soaking wet. And no I didn’t bring the charger for your iPod. Then we made the hour-ish drive north, through the country, through Lancaster City, and then back into the country again. The roads were lined with old snow, stained from a week of traffic. The sun was bright.

I had a good feeling from the moment we walked up to the store because there was a woman standing outside explaining the book to some folks who were passing by. I pretended not to know anything about it and walked quietly past her. Inside, I met the owner’s of the bookstore, Todd and Sam, and they were so kind and gave us access to the backroom to put our mound of coats and then we set my kids loose in the children’s section.

My co-writer, Tim Kreider, was there, along with his wife, Lynn. We’ve become good friends after so many long hours together, so many stories, so many words. I was anxious for him, that his story would be well-received, that people would pick up on his generous heart and sincere desire to help others.

I shouldn’t have worried. By the time I finished saying hello to Tim and Lynn and putting our coats in the back room and getting the kids (and Maile) settled, there were already six or seven people waiting for a book. So Tim and I sat down at a small table and Todd from Aaron’s Books introduced us and then we started signing. And we didn’t stop signing, not for two hours. The people just kept coming, some with sincere looks of admiration on their faces for what Tim was trying to do, some with tears in their eyes, hoping to gain any small piece of wisdom about how to approach life with their own troubled child.

One couple in particular still sticks in my mind, the way they clutched the book like a talisman. They shook our hands and held on a little longer than is usual, and the wife cried a little while she explained the situation with their daughter, and the husband cleared his throat and looked away, and I thought to myself that all they want is a normal life. All they want is a happy child. But we don’t always get what we want, and sometimes life sucks, and then what?

Over 100 people came through the line in a few short hours.

Later that night we went back to Tim and Lynn’s and were soon joined by 40 or 50 of their friends, eating food and laughing and mostly just celebrating how far Tim has come, celebrating the launch of this book, celebrating life and this often untapped power to overcome even the most dire of circumstances. A few people bought more books, some purchasing their third or fourth copies in order to give them away to friends they think might benefit from them.

I learned a few things on Saturday while coasting along on this high that resulted from a wonderful book signing. The first is that it is so important to celebrate things, to come together with friends and to hold each other up and to say, “Look at what we’ve been able to do together. This is important. I appreciate you.”

The other thing I learned is how wonderful it is when someone takes time out of their life to join you in these kinds of celebrations. I will never forget the friends who came from far and wide to visit us at the book signing, to buy a book, and to say, “Well done. Congratulations. We’re proud of you.” So to those of you who came, to those familiar faces who stood at the end of a long line, thank you.

Life wasn’t mean to be lived alone. Who are you encouraging?

If you’re interested in purchasing a copy of Refuse To Drown, you can check it out HERE.

11 Replies to “How Our First Book Signing Went on Saturday”