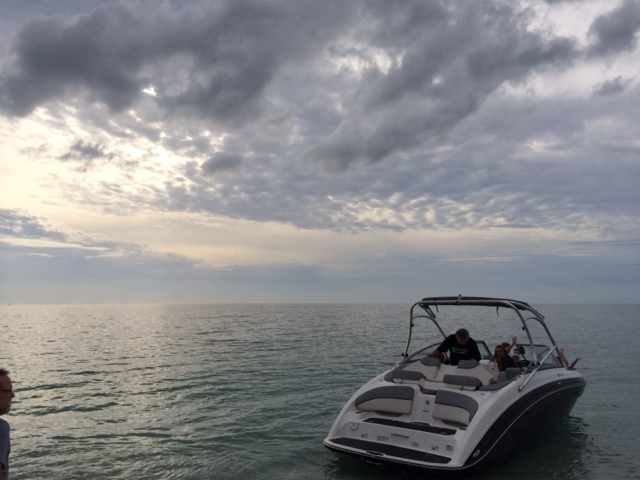 There’s something fitting about starting a long journey on January 1st. There’s something that feels right about 1023 miles to go, heading north, heading for home. The gray sky leans in and the rain starts to fall and it feels like maybe you’ll never get there, and maybe that’s okay.

The small bumps in the highway form a rhythm, like the back-and-forth swaying of a hypnotist’s locket, and I snag a pillow from the back, tilt my seat, and lean over against the window. Out of the corner of my eye, the road blurs by, mile after mile.

Three of the other nephews and nieces dig and dig, a deepening hole forming in the sand. The sun comes and goes, and the wind forms small swells out beyond the sandbar. They dig. One more scoop, one more rake. Deeper they go, on their way to China.

One of my nieces, two years old and bursting with life, rolls in the sand, then lays on her stomach and stares at it, listening for a message I will never hear. Then she slowly lowers her face until the sand coats it. She looks up at me where I recline, clean and dry on a beach chair, and she smiles, then laughs loud, as if my cleanliness amuses her.

I cringe at so much sand covering skin. The grittiness. The thought of getting down and rolling on the beach, well, it’s simply something I would never do.

But then I think that her rolling in the sand is about as close as it comes to living completely in the present as one can get, no care for what it will take to get clean, no worry about sand in the hair that will not come out, no concern for the thin film of grit that will soon fill the minivan.

When have I rolled in the sand? Too long ago.

Maile and I in sea kayaks, the shore receding behind us. Small green and yellow buoys, the size of cantaloupes, bob in the water, five digit numbers handwritten on them in black marker. I stare down through the blue-green and sometimes spot the sandy floor, eight feet below us. It is rippled, like dessert sand, or pond water after a small boy throws in a large rock. Water within water. Messages within messages.

Reluctantly we turn towards the beach, and though I paddle less hard, the wind and the waves drive us back to reality. No matter how far you go, there is always the returning. Except perhaps once in life, when there is no going back.

Roll in the sand.

Say the things you’ve been wanting to say.

There’s no going back.

2 Replies to “What I Found On the Journey Home”