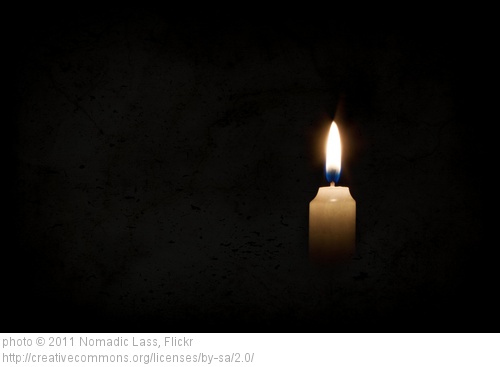 When I first got married, it was mostly because I thought Maile was smart and gorgeous and she loved to read as much as I did. And also for the sex. Seeing as how I was brought up in the Puritan ideals of abstention, the sex was a major consideration.

But now that we’ve been married for nearly fifteen years, there’s something else I love about her: her honesty. She is my most loyal critic, as well as my greatest supporter, and in a world that will all too quickly inflate you with meaningless praise, an honest, loving critic is worth more than I ever could have dreamed.

I spent two solid months this summer writing a novel for my children, a book about the things that concerned me when I was a kid, a book about friendship and adventure and dying (I was a melancholy child). I poured myself into that book, to the point that I was emotionally exhausted when I finished. Mentally worn out. And slightly depressed that it was over. Someday, I hope you will read this book.

But I have a fatal flaw for a fiction writer – more than one actually. In real life I avoid conflict, and that carries over into my writing. I protect my characters. No matter how hard I try, they get along too well with one another. They make responsible choices. They lay low.
This is not a good recipe for creating engaging fiction.

When I returned to blogging about a month ago, you all welcomed me back with open arms. I was away for nearly a year, yet you came back, too. More importantly, I’m enjoying myself again because at some point during my break I got over my obsession with numbers. I no longer get panic attacks if I don’t have a post lined up for the next day. I no longer feel the heart-rending disappointment when a post flops.

Still, I felt a sense of unease. This isn’t really what I want to write, not forever, I told myself at night, staring at the ceiling high above. I want to write fiction. I want to be a novelist.

But a sneaking suspicion had begun to grow in my mind, one that I pondered ever since finishing the book for my kids. And when I didn’t have the strength to say the words out loud, Maile said them for me.

They came after I expressed my novelist frustrations to her one morning. We were making the bed. I went on and on, complaining about my weaknesses as a fiction writer, my unhappiness with the plot of the children’s book I had written. Then she said something, something that I had been thinking but did not have the strength to admit out loud. Something that, if I had let it, could have hurt me deeply.

“You might not want to hear what I have to say,” she said in a kind voice.

“Maybe,” she said, “just maybe, you’re not a novelist. Maybe you’re a nonfiction writer. That’s your best writing. That’s what people respond to.”

I took a deep breath. Sometimes the truth about ourselves hurts. Sometimes it isn’t exactly what we want to hear.

“I’ve been wondering the same thing,” I admitted.

I wonder how many of us spend our lives trying to be what we want to be instead of embracing who we are? I wonder if this contributes to the truth behind Thoreau’s famous quote that “The mass of men lead lives of quiet desperation.” Maybe we’re desperate because we’re dishonest with ourselves and with each other about who we are.

Of course there’s a flip side to this coin, the truth that life is a struggle, a journey, and that anything worth having takes some work, some perseverance. Don’t give up on your dreams. Etcetera, etcetera. But maybe the one thing standing between you and the life you were meant to live is a dash of humility, a small measure of honesty, and a mustard seed of hope.

The hope that who you are, who you were created to be, is enough.