On Sunday night I got to hang out with the young adults from my church, GCC.

Part of me is really happy not to be in my 20s anymore…the angst, the uncertainty, the mistakes-yet-to-come.  But there is a passion in that age group that I miss.  And an aggressive questioning.  And a kind of optimism that I’d like to regain.

Anyway, we talked about life as story, the theme made so popular by guys like Allender and Miller.  Towards the end of the night I challenged them to think about a metaphor for their own story.

I had to stop and think.  What’s my metaphor?

Then it came to me: a long hike. 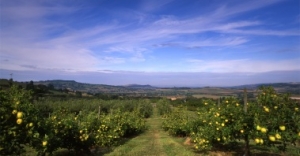 Back when Maile and I lived in England, our friends Doug and Shannon Schneider came to visit.  One day Doug and I decided to head out on the public foot paths, trying to find a cliff that was marked topographically on this map we had.

If you’ve never been to England, I should tell you that the public walking paths are awesome.  They’re everywhere, these footpaths: through fields, through forests, even right through people’s back yards! One took us three feet behind someone’s house. Some are so old and so well traveled that they’ve turned into huge ruts knee-deep.  For hundreds of years people have walked these paths.

Anyway, the map we had was detailed, but there’s no way of ever knowing exactly where you’re at, except by keeping track of the various intersections and comparing them with the intersections/elevations/landmarks on the map.  We set off for a particular overlook, excited about the path ahead.

But once we found out where we really were, then we could start again, seeking our destination in earnest.

Sitting with the young adults last night, I realized: this is the journey of our lives. We do the best with what we have, and we set off in one direction.  Then circumstances conspire, perhaps we misread an intersection, and after a few weeks or months or years we realize: we’re not where we want to be! We’re lost! So we sit down and analyze our lives, review the path we’ve taken, find out where we’re actually at.

So where are you in your journey? Just starting out, a full pack and lots of water and no blisters? Suddenly realized you’re lost and feeling like you’ve wasted a lot of time? Setting out on a new journey with renewed hope?  I’d love to hear your story.  And if you think this path stuff is a bunch of hooey, what’s your life metaphor?

To read about the point last year when I realized I wasn’t even close to where I wanted to be, check out THIS POST.

One Reply to “What’s Your Life Metaphor?”