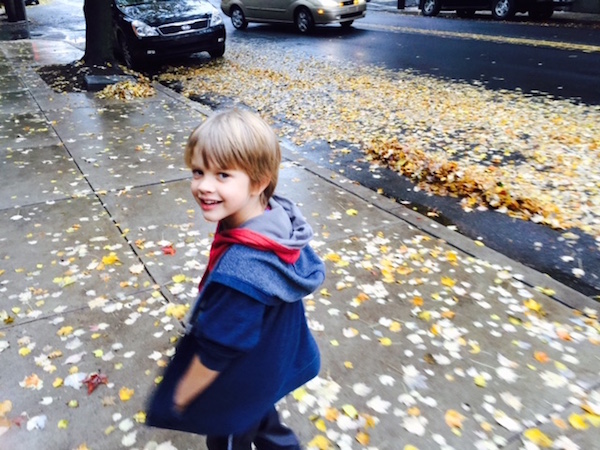 It was Sam’s second wrestling match of the tournament. He had won his first after three hard-fought periods, but the second match, it was a tough one. The other kid took him down quick and nearly had him pinned for the entire first period. The second period was more of the same—the other kid on top of Sam while Sam struggling to keep his shoulder blades off the mat, twisting and turning and writhing and fighting. For an entire minute, the other kid nearly had him pinned, but Sam kept resisting.

Then, the third period, and nothing really changed. Besides an escape, Sam didn’t get any more points, and the other kid nearly had him pinned. Again. For the duration of three periods, he was on his back, the match on the line.

But at one point, while he was in the middle of fighting, he looked over at me where I sat at the edge of the mat. I was shouting his name, cheering him on.

We made eye contact. It was actually kind of eerie, because he was in this huge struggle, giving it all he could, and it was all happening in this massive gymnasium with two other matches taking place and hundreds of people shouting and whistles being blown and kids cheering on their teammates and mothers wringing their hands and cheering, and in the middle of all of that chaos, our eyes met. His little 9-year-old face stared over at me, in the middle of that fight, and our eyes locked.

And what I saw in his eyes, well, I can still see it.

For the last ten years, I’ve made a living as a writer. Mostly co-writing books, helping people tell their stories and share their messages. Business people want to pass on their miraculous journey to their kids or folks want to share how they overcame. And it’s an amazing way to live a life. The creativity, the depth, the searching for stories, the listening—it’s incredibly rewarding. Now, I even get to write my own books, which is like blessing on top of blessing. A gift after you thought all the gifts had been opened.

But it’s also a roller coaster way to live a life. Some years, we have plenty. Other years can be a little lean. And those lean years, they can really test you. They can make you feel like you’re in the middle of a wrestling match, always on your back, always struggling to get out from under a serious weight.

During those years, it can feel like we’re on the edge of being pinned. And sometimes giving up seems not only like a good option–it seems sensible, even necessary. Why keep fighting when the outcome feels inevitable?

The seconds were ticking down. It felt like there was no way Sam could win—the point total was too much to overcome. But he still wasn’t giving up. That crazy kid. I think about the quote by the woman who wrote the book Unbroken when she was speaking about the real-life main character: “What made him an impossible boy also made him an unbreakable man.”

When we made eye contact, I expected to see fear in his eyes, or desperation. Or maybe disappointment. A lot of kids cry at these tournaments, when they lose, and I wouldn’t have faulted him, if emotion took over. There is a particular feeling to being bested in front of large crowds in a one-on-one battle. It isn’t pleasant.

Yet I didn’t see any of those things in Sam’s eyes–not fear or desperation or disappointment or sadness or embarrassment or shame. None of that. It was remarkable. He was looking at me with nothing apart from fierce determination. In the middle of that match-long struggle, he locked eyes with me, and what I saw there was someone who was calm. And aware. And he was not going to give up, no matter what. No matter how dire the situation. No matter how far behind. Because the match wasn’t over, and as long as the match wasn’t over, he wasn’t going to get pinned. He had made up his mind.

The whistle blew. He lost. But not really.

It’s amazing, what your kids can teach you.

Did you know I wrote two award-winning young adult novels? You can check out the first one HERE.