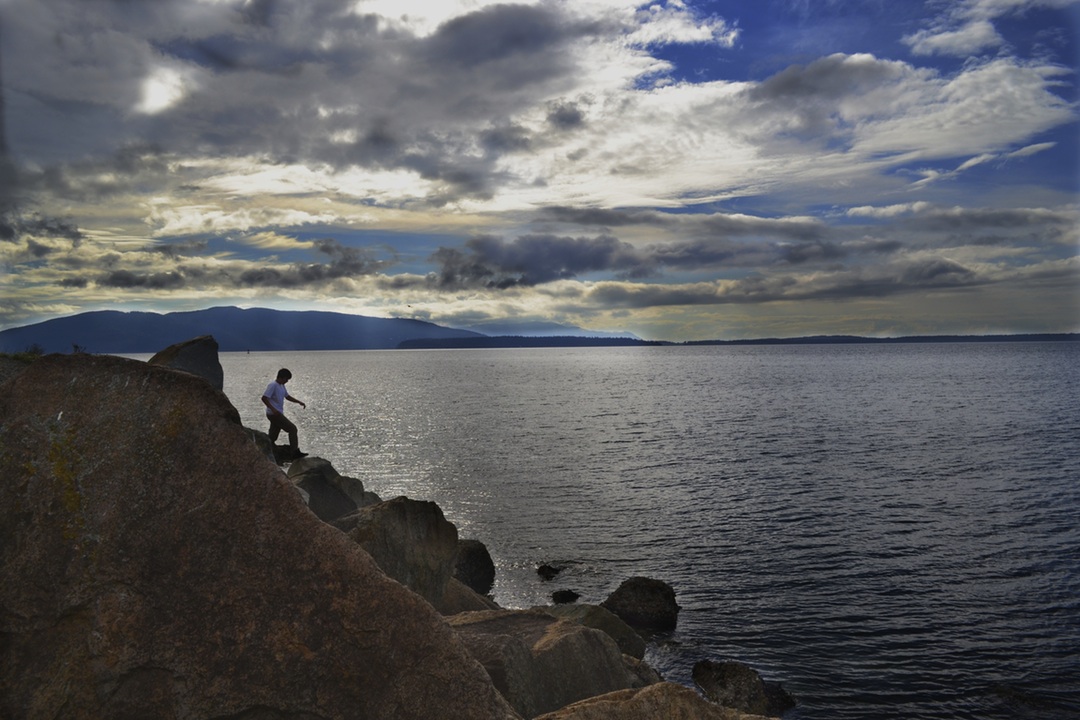 The saints in the stained-glass windows look down on us, somber and subdued. Outside, it’s a cloudy day. I get to the front of the line and Reverend Lauren hands me the wafer.

“The body of Christ, the bread of heaven.”

Then I turn to the person holding the cup. It’s my son, Cade, and he looks a little nervous. Our eyes are nearly level to each other now, our shoulders nearly even. He is far from the baby I watched slip into existence. He is getting closer to the man he will someday be.

“The blood of Christ, the cup of salvation,” he says, and I dip my wafer in the cup.

I am halfway through my 40th year. This is difficult to comprehend. I know those of you in your 50s and 60s and 70s will wave your hand at me and call me a “young pup,” but this 40th year is passing heavy and opaque, like molasses. It’s been hard to grasp. I feel so old and so young, all at once.

I had one genuine moment of panic recently, after my friend Nelson passed away, in which I thought, “No! I don’t want to get old! I’m not ready.” But for the most part, I welcome what these coming decades have to offer. They seem kinder in a way, these recent and coming years, less judgmental, less demanding.

When I was in my 10th year, it was 1986, and all I wanted to do was play down at the creek and make it to the Major Leagues. I wore tennis balls out by throwing them up against the side of the barn and chasing them down. There was a tree by the creek that became a graveyard for my fishing line. Life was simple and fun and I spent most of it reading on the large front porch of the farmhouse where we lived. I wonder what I thought about then. I wonder.

When I was in my 20th year, it was 1996 and I was finishing my freshman year in college. I knew less about myself in those years than at any other time in my life. To say I was finding my way would be a huge understatement. I was about to start writing in earnest. I was about to meet Maile. I was about to become my own person, separate from the household of my parents. I stood on the edge of an abyss, and I had no idea the depths of it.

When I was in my 30th year, it was 2006, and we had just come back from England, and we were starting a new life with two children. We would find community and friendships in Virginia that were so beautiful and crucial. And still, God was preparing us for the most difficult time of our lives, in 2009.

And now, my 40th year. Some things seem easier. I know who I am, I know what I’m to do. I have the beautiful and unconditional love of a fabulous woman and five (almost six) children. We have, somehow, landed on our feet, even after many lean years. I wake up everyday and do what I love to do: I write.

But some things seem more difficult, too. My children need me in ways they never needed me before when it was all diapers and baby food and middle-of-the-night wake-up calls. Maile and I are hitting the long stretch of a marriage, 17 years in, when you have a better understanding of love in its toil and its wonder.

Perhaps most difficult of all, I’m coming to terms with my place in the world. I’m not sure how else to say it. I’m not sure why that’s a difficult thing, but it requires a real working through, like a puzzle you’ve never done before, one you haven’t got a picture for, one without even the straight-lined edges to start with.

One Reply to “Some Thoughts on My 40th Year”