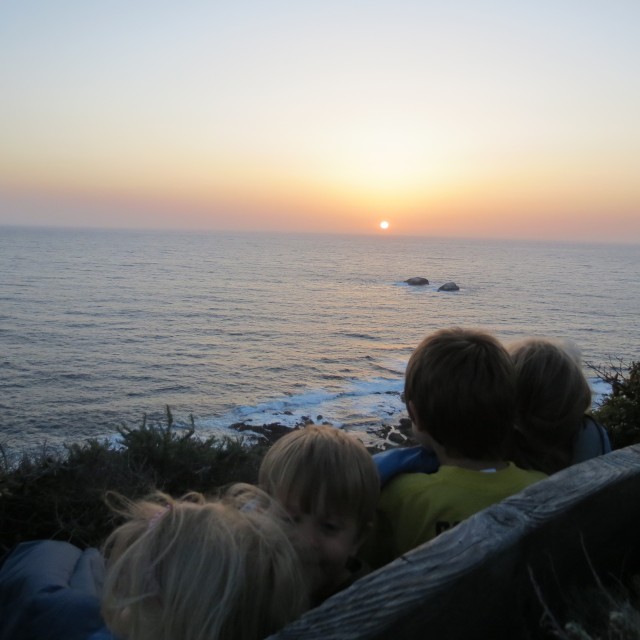 I’m writing this on Sunday night in the bed at the back of the bus. It’s peaceful in here: the three oldest kids are in their bunks with the occasional complaint about an early bedtime; Maile is writing at the front of the bus; and Sam just crawled into bed beside me, sucking his thumb and turning his blanket around and around and around, looking for the corner where the label sticks out.

Monday, the day you’re probably reading this, represents a rather momentous day for us: for the first time in three months and over 5,000 miles, we head east. Our trip began back in February when we headed south down the east coast, meandered through the southeast in March, drove west through Oklahoma and Texas in April, then cruised north up the California coast.

But on Monday we head east.

Returning home from such an adventure means laying aside the exciting for the practical, the unexpected for the everyday.

But I’ve concluded that this, also, is a good thing. The adventure, while it lasted (and continues to last for the next month), has broken many areas of my life down to their most basic elements, and then allowed me the space and time to build those areas back up. My marriage. Being a dad. Writing. Mile by mile, I’m reconstructing myself.

So tomorrow we head east. It’s hard to believe. There isn’t a whole lot that I can tell you about what my life will look like in a month’s time. Where we’ll live. What I’ll be doing for a living. But as I write those words, I realize that whatever does happen will simply be a continuation of this grand adventure we’ve been on, and I’m okay with that.

Better than okay – I’m eager for it. I’m eager to live this life. Just about anything is possible right now. I’ve decided to let that fill me with a sense of anticipation, and not a sense of worry.

Thanks in advance for traveling with us down the home stretch. You all have been such great traveling partners. Time to head for the sunrise.

What did the end of your latest adventure look like? How did the transition back into normal life go?