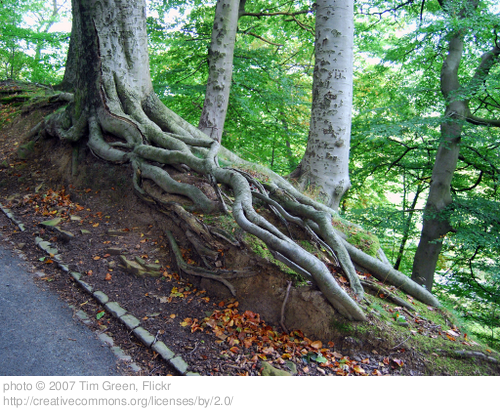 My Grandpa Beiler had a personality impossible to forget. I never witnessed his anger, though stories of it were legendary. What I remember of him is that he never let anyone stop him from doing what he wanted to do. I also remember that he always wore the premonition of a smile somewhere around the corners of his mouth. On Sunday afternoons he gave me a quarter to comb his hair, during which he nearly always fell asleep.

My mom remembers driving down one of these Lancaster County roads, early in the morning. Approaching in the distance, she saw a truck pulling a trailer loaded down with sheds. The truck drove down the middle of the road, well over the speed limit.

“I’m sure that guy is going to get over,” she kept telling herself as the vehicle drew closer. But that truck never strayed from where it straddled the yellow line, and she was forced into the ditch.

As she drove away, she looked into her rearview mirror with amazement.

“That was my Dad!” she exclaimed to herself.

That’s how my Grandpa did things. Full steam ahead, up the middle, take no prisoners. When pulled over by a police officer for not having the correct licenses on the aforementioned truck and trailer, he conceded to the officer’s request that he park the thing along the highway overnight and come back the next day with the correct paperwork. Five minutes after the cop drove off, so did my Grandpa.

But in 1985, he contracted a serious kidney disease. Initially the doctors let Grandpa do some kind of self-administered dialysis through a tube that went directly into his abdomen. He was only supposed to do this in sterile places. Being my Grandpa, and not wanting to waste any of his own time, he administered the bag of fluid to himself while driving down the highway on his way to market, hanging the bag from the little hook above his door.

Then, numerous infections set in at the place the tube went into his abdomen, and he nearly died (I’m sure it had nothing to do with his method of self-administration), so his doctors moved him on to dialysis. After being on dialysis for some time, perhaps a year or so, he eventually received a kidney transplant.

The doctors later told us that what he had was Polycystic Kidney Disease, a kidney disorder in which multiple cysts form on the kidneys, enlarging them and impeding normal kidney operation. It is a genetic disorder – if your parents have it, you can get it.

There are so many things passed down from one generation to the next: our physical traits, our emotional strength, our mental health. Diseases. Tendencies. Ways of looking at the world.

We are not islands.

One night, during their annual stay in Florida, Grandma and Grandpa got ready for bed. During the previous week, my Grandpa had stopped joining Grandma on her walks around Pinecraft. During one of his last walks with her, he had been forced to take a break, stop along the road, and sit down.

“I just don’t have it in me,” he had said, trying to catch his breath.

Grandma turned off the kitchen light and looked at him for a brief moment. He lay on the sofa, eyes closing. He looked exhausted.

For some strange reason, he had spoken on the phone to just about everyone in the family that night. Either he had called them, or they had called him.

Maybe we should go to the doctor, she thought. But it was Saturday night, and the next morning was Easter Sunday. Soon they’d be driving back to Pennsylvania. She made a mental note to make sure he got to the doctor as soon as they returned home.

He went to bed.

“I guess I’ll stay up and read a little bit,” Grandma told him.

They had been sleeping in separate beds, because Grandpa was so restless in his sleep.

Not too much later, Grandma went to bed.

The next morning Grandma woke up with a bad feeling. Grandpa was being too quiet.

She walked over to his room and found him there, in his bed, completely still. He had died in his sleep. It was 1991.

I was fourteen when Grandpa died. I remember the solemnity of watching his coffin go down into the grave, the permanence of the gravestone. I remember the meal afterwards, with so many Amish relatives.

Most of all I remember that, for some reason, my two cousins, one of my sisters and I walked the five miles from the cemetery to Grandma’s house when it was over. It was a warm spring day, and halfway home I took off my new black shoes (they gave me blisters) and walked barefoot the rest of the way. The road felt cold and smooth under my feet.

And if you read yesterday’s story, yes, it was a chicken, although I preferred Tor’s explanation in the comments.