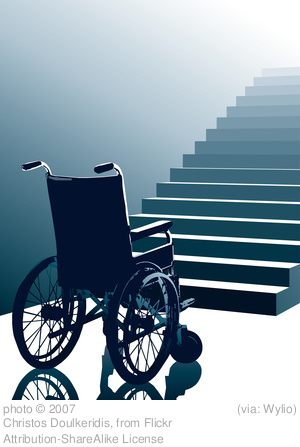 Recently I’ve spent a lot of time standing at the back of the church. Maybe it’s because I like to stand back there and take it all in. Or maybe it’s reflective of how I’ve felt lately: a little removed, a little estranged.

This week I meandered to the back of the auditorium and found a small space in front of an emergency exit door (and the metaphors mount). Actually, this particular location would be better described as the only slightly hidden spot in the auditorium: on one side, a table covered in sign-up sheets; on the other side, a man sitting on a mobility scooter.

I know the man. His name is Gordie.

Not too many years ago Gordie played the guitar for our church’s worship band. Whenever I saw him he would shake my hand slowly with his big bear paw and say in his deep, quiet voice, “Hey, Shawn.” Gordie never wasted words. He loved listening to a good story, and when you spoke to him he wasn’t looking around or feeling for his cell phone – he was right there, in that moment. His replies were thoughtful and succinct. He is the friendliest quiet man I’ve ever met.

I don’t know the whole story, but Gordie started feeling ill. And his body stopped listening to his mind in small, barely noticeable ways. Then came the news that no one wanted to hear: Gordie had ALS, also known as Lou Gehrig’s, a disease of the nerve cells that control voluntary movement. The doctors said that, at a rate they could not forecast, Gordie’s body would begin shutting down.

Gordie played guitar for our church for a long time, standing for a while, then leaning on a stool, then sitting in a chair. But eventually his fingers couldn’t keep up with his mind. When I speak to him now, his eyes are the same, taking it all in, but he has lost most of his ability to verbally communicate. He gets around on his scooter. He comes to church every Sunday.

And, as always, he loves to listen.

Standing beside Gordie on Sunday, I wondered what it was like, having full mental capacity yet unable to do so much. Trapped. When the service ended, he lowered the seat of his chair, moved his hand on the joystick that controls the scooter, and pulled away. When he speeds down the hallway, his wife laughs and reminds him to drop it down a gear.

I leaned forward and put my hand on his shoulder.

“Have a good week, Gordie.”

He smiled. I missed his deep voice.

I want to be as courageous as Gordie. I want to have as much perseverance as he does. But sometimes I just feel scared and weak. Sometimes I want to hang out by the emergency exit doors in case I need to make a quick getaway…from faith, from community, from life.

But if there’s anything I’ve learned from Gordie, it’s that anyone can get through anything. I’ve learned the value of listening, of looking at everyone through kind eyes. Mostly I’ve learned that you don’t have to speak to change people’s lives.

When I grow up, I want to be like Gordie.